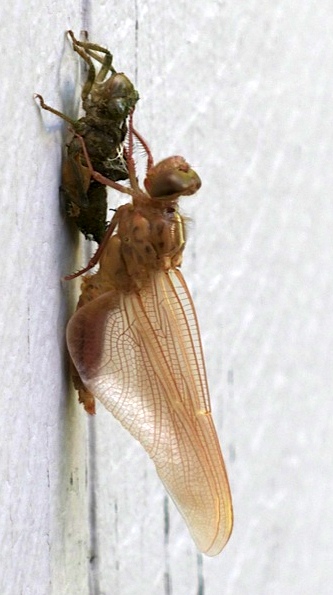 If you live near pooling water, you have likely seen a lot of dragonflies, flying about.  But why have you never seen dragonfly babies?  We have a small pond at our house (really, the tiniest pond you could have), and have recently realized that it is a reproductive ground for dragonflies, so this week’s newsletter is all about their nymph and adult stages, so now you’ll know where to look for dragonfly young.

When I was in graduate school, teaching introductory biology labs at University of Oregon, all of us young teachers wanted to reinvigorate the labs and get our non-science major students super excited about science.  One young male teacher wanted to do a lab on predation (boys do like violence!) and one young female teacher wanted to do a lab with live animals, so we could observe behavior.  The professor we worked with wanted us to include some statistical analysis, so we knew we had to have large animals and a clear comparison.  We settled on designing a lab based on two kinds of predation – ambush and pursuit predation.  Dragonfly nymphs are ambush predators, meaning they will sit and wait for their prey, so action to catch prey is precise and sudden.  Most fish are pursuit predators, meaning that they will follow their food and hope to catch up to it.

It’s easy to get fish – the local pet store had plenty of goldfish we could use.  It was also easy to get prey – we collected Daphnia, teeny water fleas, from my ecology lab, where we were nurturing some samples we had collected from Oregon ponds that were reproducing like crazy.  The ambush predators – dragonflies – we would have to go outside to find.  Western Oregon is water-rich, so we donned our rubber boots, found a local pond, and stuck our hands into the mud at its bottom.  Letting the mud seep between our fingers, back into the pond, we could fish out dozens of dragonfly nymphs in a matter of minutes.

Dragonfly nymphs are probably one of the ugliest bugs you could find.  Colored like mud, with huge eyes, a scaly body, and lanky legs, you might think a dragonfly nymph was a cricket or grasshopper.  However it lacks springy back legs and its rough exoskeleton holds onto debris so easily, that it just doesn’t look so fast and clean.  If you watch one long enough, you may see it try to bite something, and at that moment the lizard part of your brain will realize it’s something nasty, akin to the mother alien in the movie Alien.  Dragonfly nymphs (and perhaps the adults too) have retractable jaws like a snake, so can attack prey just as large, if not larger than it.  When we set our dragonfly nymphs into goldfish bowls to test our lab, we found they ate the Daphnia, but seemed much more eager to eat the goldfish, which were as large, or larger than the nymphs.

Just as a snake sheds its skin, or a butterfly emerges from a cocoon, the adult dragonfly will emerge from the exoskeleton of the nymph, as it commits to completing its life above water.  We have seen several empty nymph “shells” this week, each several feet from the pond from which they had crawled.  We were thrilled to see a dragonfly emerging from its “shell” today.  It took several hours to fully stretch out and dry its wings.  Just like a horse or cow can amazingly begin to walk as soon as it is born, the instant it finally spread its wings, it flew away, leaving the nymph exoskeleton behind.

Over these last two weeks, Sneha and Elia, two of our summer interns, are working on invigorating the curriculum at  http://strollerhikes.com/news/curriculum/ , an unfinished project we began three years ago.  They are looking at how to group preschool/grade school activities, with themes, culminating in suggested “field trip” hikes to some of our wonderful, local natural areas.  They are also trying some of the activities, creating photos and other graphics.  We invite you to share your photos as well – making homemade instruments, bug boxes, keeping nature journals, doing art projects, and more – see below.

You can make any hike richer by looking for creatures and studying them.  When you see dragonflies, look for the local pond, and “dig” for nymphs.  They are a great find for observing in a clear jar, before you set them free and head home.

p.s. We’re taking a TRUE vacation next week, so there will be no weekly newsletter next week – you’re getting this and next week’s events in this newsletter.  Happy vacation!