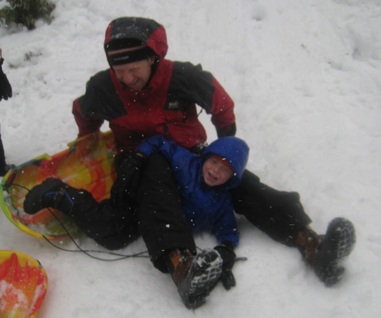 A year ago, Melissa, one of my Stroller Hikes pals, invited our family to join hers at a Bear Valley cabin.  Melissa described the weekend of power outages, toddler fights, and dreary cabin fever as “pudding.”  It was an experience, positive at times, but overall simply coined as “an adventure,” and we at minimum gained perspective from being cold, light deprived, house bound, and without amenities powered by electricity for so long.  Returning back to the Bay Area, we rested easy, returning to heat, power, and tons of mild-weather options to get outside in the sunshine.

I found myself describing situations as “pudding” a lot this week.  This followed a trip to the same cabin with Melissa and another Stroller Hikes friend, Ana, and her family, which is best described as “mousse” – no pudding to be had.  Just fun, the perfect driving conditions with a perfect amount of snow (Max and Andrew, above in a sled crash), no limit to electricity, and kids only fighting as they will when tired, hungry, or competitive.  A few hours after getting home, all unpacked and breathing those great sighs that come after a full weekend doing great things, perspective not so happily greeted us, with a fever in Holly and a sleepless night as illness quickly took over her little body.  The illness persisted throughout the week, culminating in two pediatrician visits and a great deal of anxiety as our first backpacking trip of the season approached and was quickly postponed to next weekend.

Pudding is an altogether common experience as a parent.  I recall some things being considerably simpler as a single, childless woman; when experiences turned sideways, there were a lot of options that could change them.  With family situations, the simple fact that we have little, if any, control of what our spouses and kids will do, can increase the potential of an otherwise fine situation going sour.   I’ve met some amazing parents with amazing skills – ready with snacks, songs, toys, or a perfect conversation topic – in order to change moods, redirect behavior, and revive energy at an event.  But pudding is inevitable sometimes, and although less than ideal at one time, pudding is something you can laugh over, later.

On Thursday, knowing Holly needed some air and Vitamin D, we ventured on our Backpacking Bambinos hike to Picchetti Ranch, in the Cupertino hills.  We were thrilled to have company, and I was reminded how a social group can make all the difference in keeping an event positive.  Karl and his daughter, Cori and her two kids, and Sarah and her two, joined us for a 65-minute hike into the hills and around the pond, at this historic open space, inclusive of some stinky plant smelling (sage, bay, and eucalyptus).  Although a chocolate milk spill earlier had Sarah fearing for a pudding-like event, her little Alice was instant friends of Max and Sierra, and they ran about together as if friends for years.  Little Wendy was distracted from her chocolate-induced dampness, watching the other kids dash about.  Max and Holly were both beaming at the end, and Max was gushing about the animals they saw and the races won, on the way back to the cars.  Max writes his first edition of From the Field this week, below.

Also this week, I celebrated the 13th edition of my 25th birthday.  I LOVE birthdays – a day where you are a star simply for being, and it’s an awesome opportunity for me to giggle with my twin sister.  The day rolled out well enough – some very positive work interactions, a mountain of cards and presents from family, and a heap of texts, Facebook “shout-outs,” and even a Quicktime version of the Happy Birthday song performed by my boss.  The evening brought Thai take-out with my beloved family, but as they came home to celebrate with me, along came the screaming and crying of a very sick Holly, the moodiness of a tired Max, and the exhaustion of a sleep-deprived, overwhelmed husband.  Birthday pudding.  But at least it was German Chocolate flavored, with a side of chocolate-dipped potato chips (care of my giggly twin).

Reflecting on it now, I have nothing to complain about.  I am blessed to have a daughter who needs me; she melts into me several times a day, as her little body fights her illness, and counts on me to lift her spirits.  I am honored to have such a clever son, who I can patch up when he has scrapes, have conversations with about engineering and biology (and he’s only 5!), and can teach about the world.  And I am privileged to have a home and life with a husband who’s as excited about making a positive impact on others’ lives, as I am, particularly each others’.

I’ll take pudding over nothing at all, any day.  If nothing else, it makes me appreciate what I have.

Happy Easter, Seder, and all other things Spring!  Holly, practicing her egg-finding skills today, in the photo at top left, in a rosier moment of her illness.